Nolite te bastardes carborundorum. (Latin translation) Don’t let the bastards grind you down. Be warned, I am a total Handmaid’s tale fan! This may be a bit long.

Grace-Full will be releasing this collection October 26th at 8pm AEDT (Aussie Time) or 5am EST (US Time). The 8 piece collection is based on The Handmaid’s Tale both book and TV Series, an idea that was born in the Grace-Full fan group, join it’s a fun time.

Theresa deliberately left out the amount of sparkle and extras she’d usually add in a polish as it’s based on such an utilitarian society, but trust me it’s still Grace-full and the holo is out of this world!

Under his Brow is a play on words to depict the gorgeous brows on the actor who plays Nick, and if you ever catch an interview his posh english accent will keep you entranced.

Under his Brow is a deep brown linear holo and it’s so pigmented that you could get away with just one coat, I have two coats in my swatches.

Guardians is a rich French Navy linear holo the color of the uniforms of the guardians, they are the enforcers who police the nation of Gillead. There isn’t much insight to their lives, but the glimpse we see in the series shows this is a job for them and they are low in the pecking order of men.

Guardians is stunningly pigmented, one coat will suffice for most I used 2 coats on my swatches. The holo in this polish is blinding but never looses sight of the color. 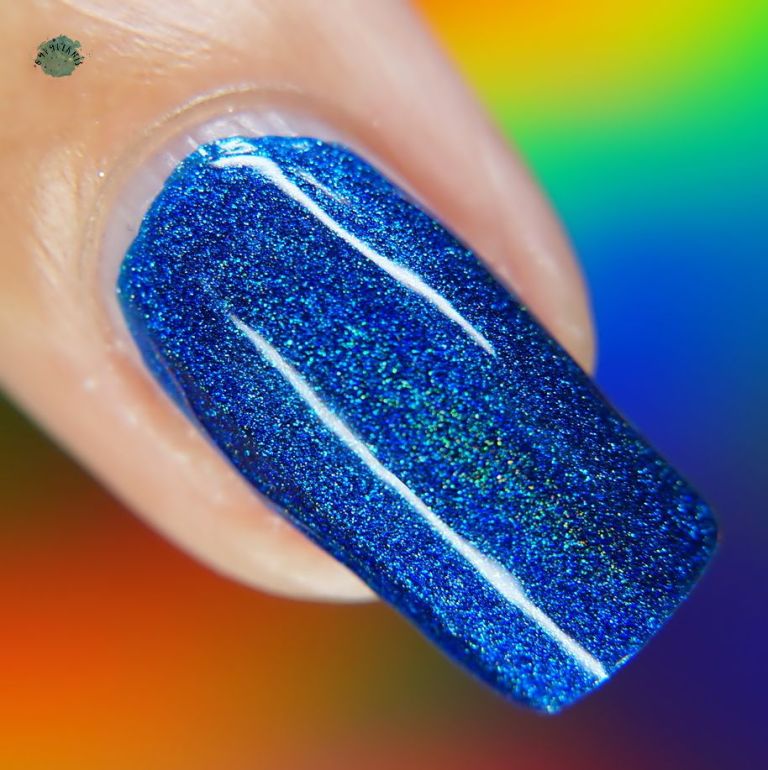 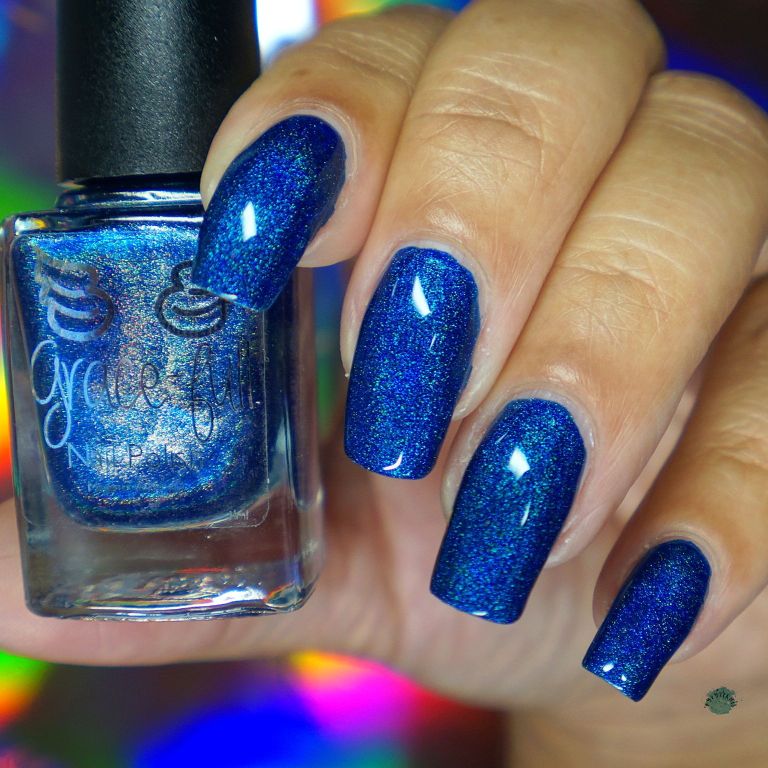 Blessed are the Meek is a brown/khaki/army green linear holo with a gold base and is inspired by the Aunts and their attire. In the bottle this color looks like a brown holo, but it really comes to light when you apply it on the nails as the olive tones really take over as it drys.

The Aunts are the characters I am most interested about since, neither the book nor the show has really done a back story of them. You have to be curious to know how she became an aunt and how she deals with the treatment of the handmaids.

Blessed is a highly pigmented polish and for some one coat will be more than enough, I used 2 coats on my swatches. 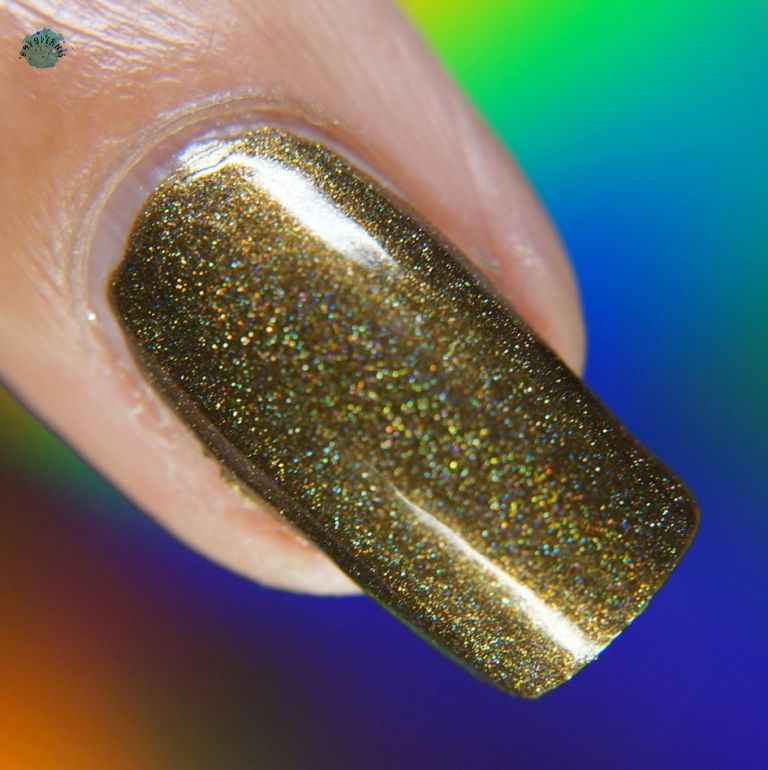 Praise Be  is a soft green crelly with gold and silver holo microglitter, this color is an ode to the Martha’s those domestic helpers who manage the household of the commanders. The delicate coloring of this polish reminds me of the Martha described in the book who was much more mild mannered than the sassy martha of the tv show.

Praise Be reaches full opacity in two quick coats, although it has its fair share of glitters it self levels beautifully. 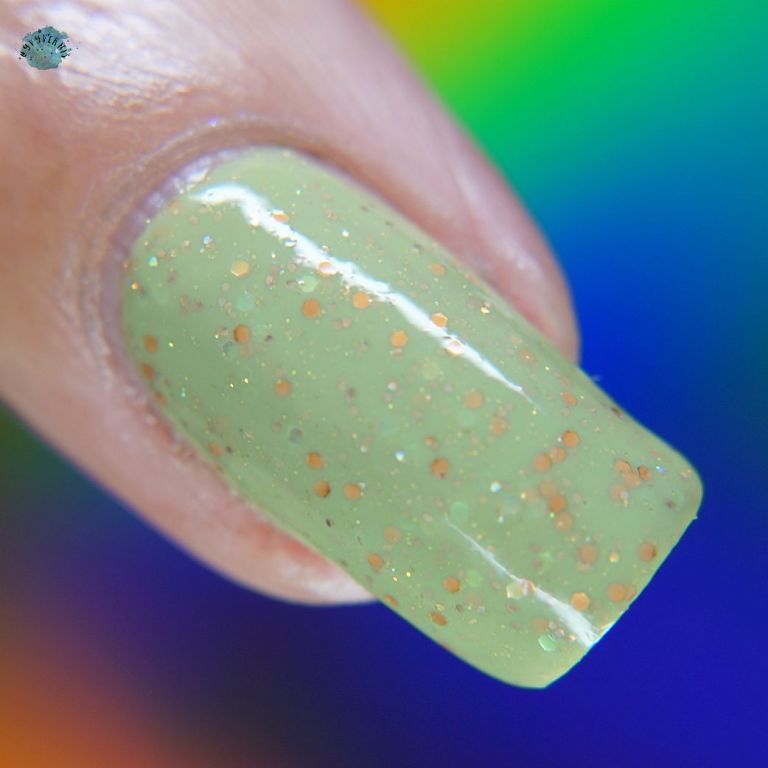 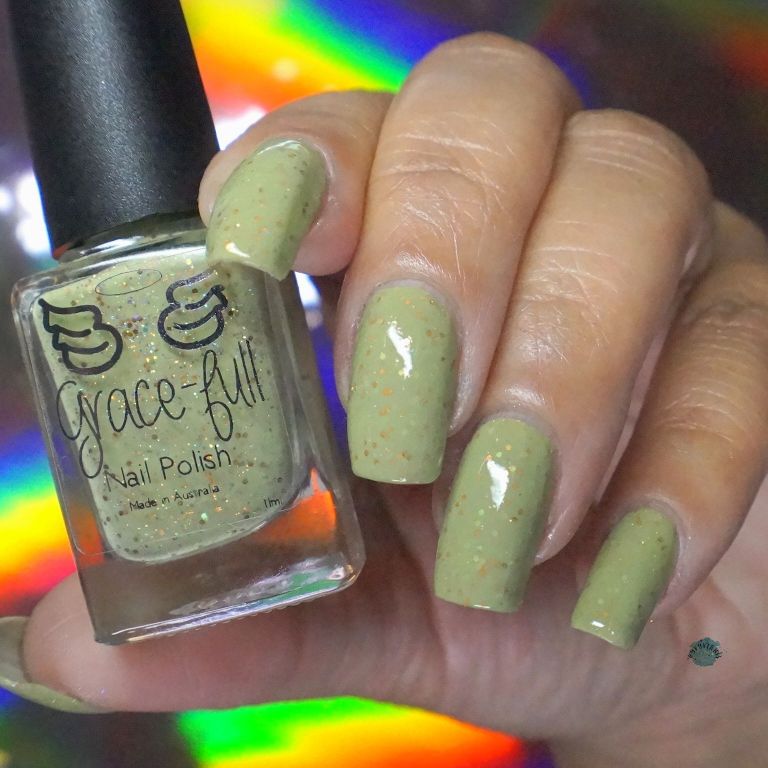 Son of Jacob is inspired by Fred the Commander, I’m so excited to see this type of finish for this inspiration. Fred is the ultimate chameleon in the story while he enforces and sets the “laws” he also breaks them in fine fashion! He moves between worlds almost undetected, but leaves a slimy trail behind him.

Good Weather is a soft grey crelly with a pink shift and ultra chrome chameleon iridescent flakes. The book and the tv show clashed in informing what color the econowives wore, in the book they are described as wearing stripes since they perform the duties of all Martha, Wife & Handmaid, their “uniform” is hard to pin down.

Theresa decided to do a neutral color with pops of color in the shift and flakes to show the inner beauty of these wives especially Nick’s wife Eden.

Good Weather is very pigmented and though a crelly it becomes fully opaque in 2 coats. I was very surprised that my talons didn’t require a third coat and the shimmer on this one is amazing as it flashes some red, green and the slightest bit of blue. 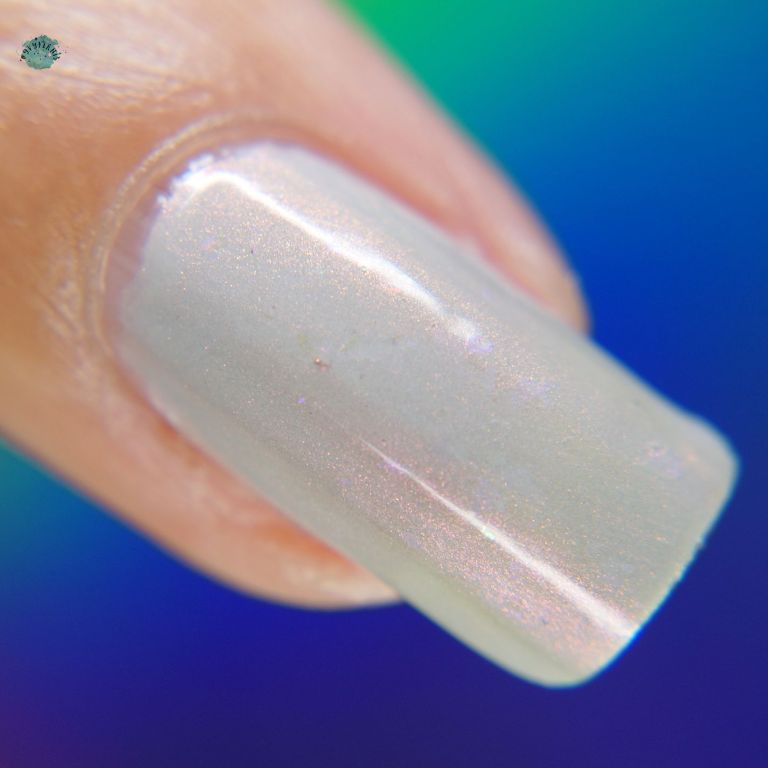 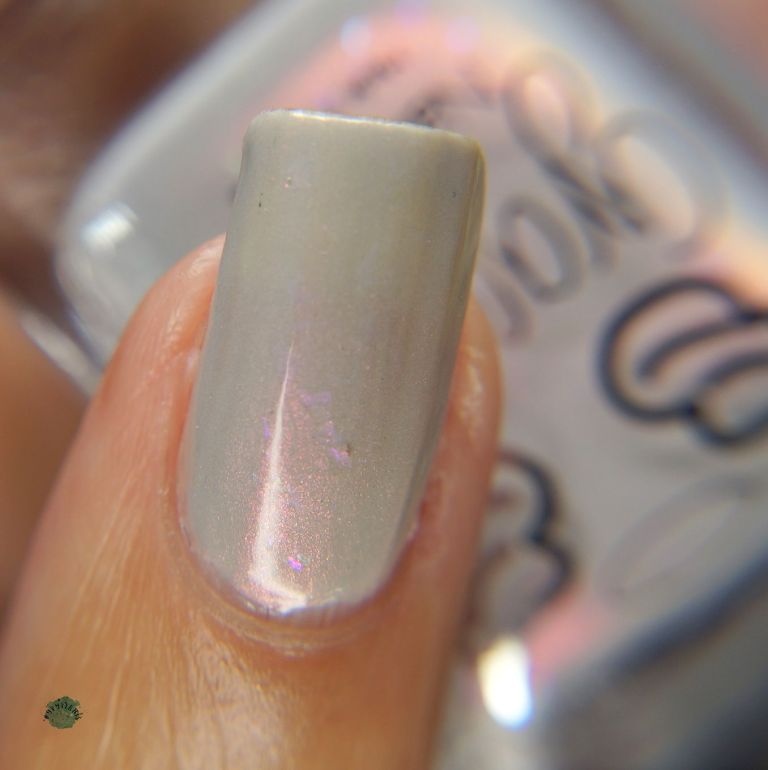 May the lord open is an aurora shimmer that shows teal in some lights and blue in others. This as you guessed is inspired by the Commander wives, in the show you see how their dresses are of a teal color, but their overcoats are darker more navy leaning teals. This polish has the ability to shift between these two colors beautifully.

May the lord open is a jelly formula and can be a bit sheer, but this is a grace-full polish so you know it’s gonna only take 2 coats to reach full opacity.

Note: this color is a bit of a stainer, please take care with your cuticle line and skin. 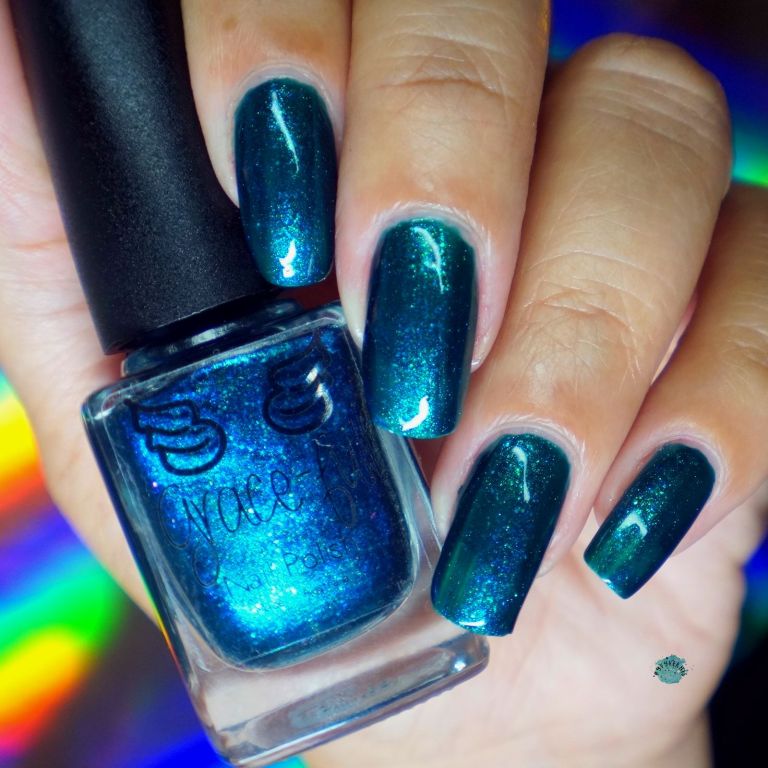 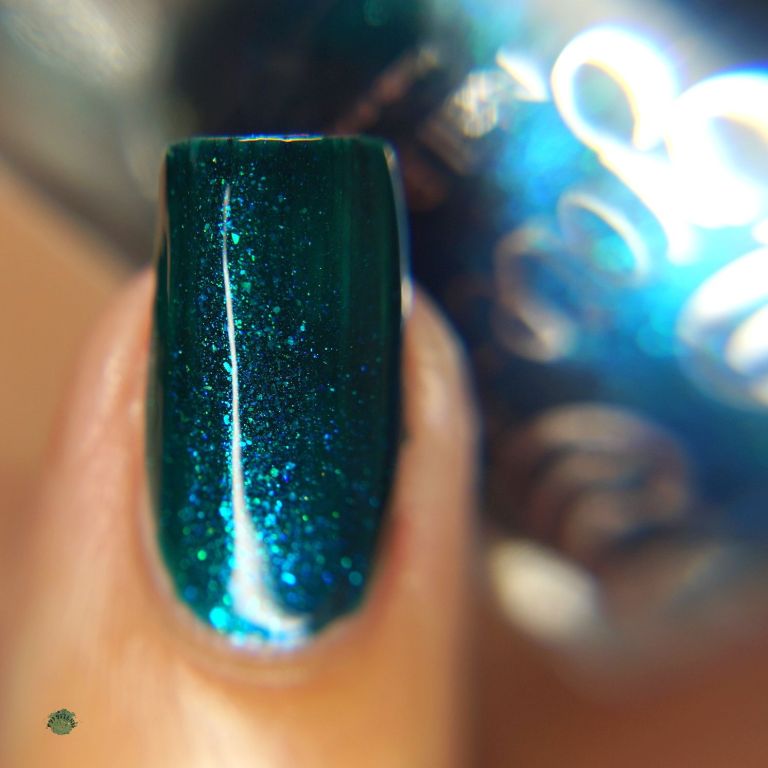 Finally the piece de resistance, Blessed be the fruit  is a Red linear holo with red metallic flakes. The handmaid’s attire is always red, except for funerals, Red is significant of the “Scarlet A” since the women who are handmaids all are presumed to have committed sins and also to signify their fertility.

This Red holo has a jelly base that gives it a depth where all the holo particles seem to be layered and you can get lost wondering how deep it goes. I used 2 coats, but shorter nails can get away with 1, I recommend 2 to give it that depth since this is a jelly base. 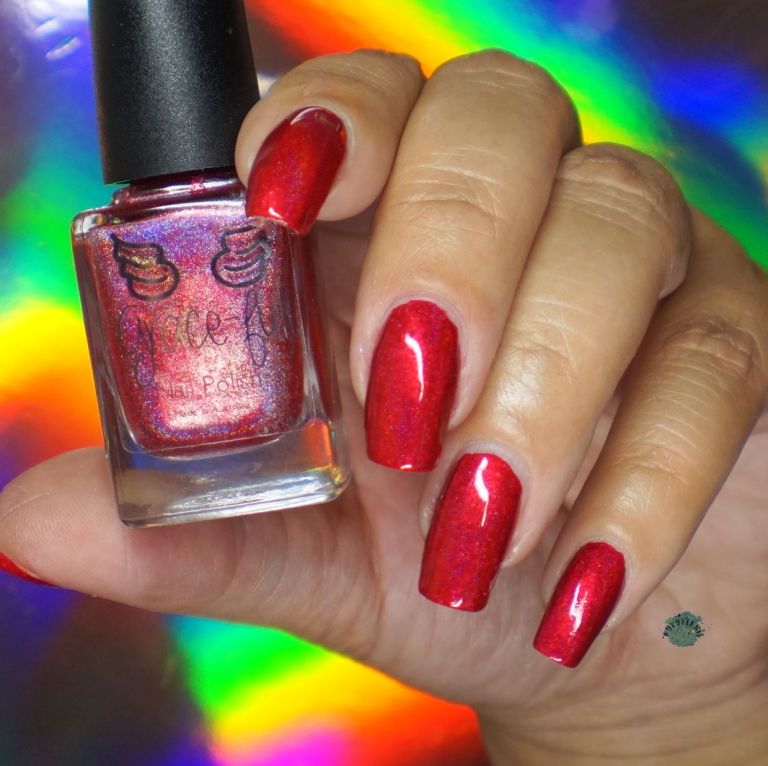 I can not say I have just one of these polishes I like more than the other, the whole collection speaks to me. They are all truly amazing!

Follow Grace-Full Polish at any of the links below

This site uses Akismet to reduce spam. Learn how your comment data is processed.